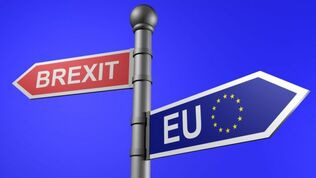 Photo courtesy of bbc.com (https://www.bbc.com/news/uk-politics-32810887)
First you may be wondering “what is Brexit?’ Brexit is big problem in Europe, the British want to leave the EU. The EU is an alliance between multiple European countries, and Britain is  “country of countries” it consists of England, Scotland, Wales, and Northern Ireland. The problem between Britain and Northern Ireland is that both sides want a backstop, meaning neither want to have a passport or car checks when crossing the border between the two countries, but if England will continue to trade with the EU even after it leaves (like Canada) the EU wants to know what items go over the border, which both sides are against, so they are trying to work out a way to prevent this from happening. You may be thinking “is brexit even happening?” As a matter of fact it is, the people of Britain voted to leave in 2016, and the exact date is March 29, 2019, Britain does not have long to sort out the plentiful and complicated problems that come along with Brexit. Britain is going through all of this for many reasons, I will name a few. For starter, the EU is not “addressing the failing economy” and unemployment is on the rise. Second the people of Britain think things like the EU and NATO are taking power away from the nations themselves, a fear of this encourages Brexit, and the last reason is the three political parties were fighting (one website uses the term “political elitism”) two parties wanted to stay and one didn’t, the party that wanted to leave (the party that would ultimately win) thought that the “recklessness and incompetence” of the market wasn’t doing them any good. The Brexit vote was a vote for the people of Britain, said people thought that the leaders lost their power to govern Britain.
In conclusion Brexit is Britain trying to exit the EU, and its become a burden to all. With the clock ticking down to March 29, Britain still has a lot of things to figure out. I hope Brexit is now a topic of interest to you, like it is to the rest of the world.